The most common sources of cellulose for industrial use are wood pulp and cotton lint. Wood contains on dry weight basis 40 to 55 % cellulose, 15 to 35 % lignin, and 25 to 40 % hemicelluloses. For the manufacturing of paper and pressboard for electrical insulation, mainly unbleached softwood kraft pulp is used. In the pulp manufacturing process, lignin and hemicelluloses are partially removed. The typical composition of unbleached softwood kraft is the following: Cellulose (75-85%), hemicellulose (10-20%), lignin (2-6%), inorganics (less than 0.5%). 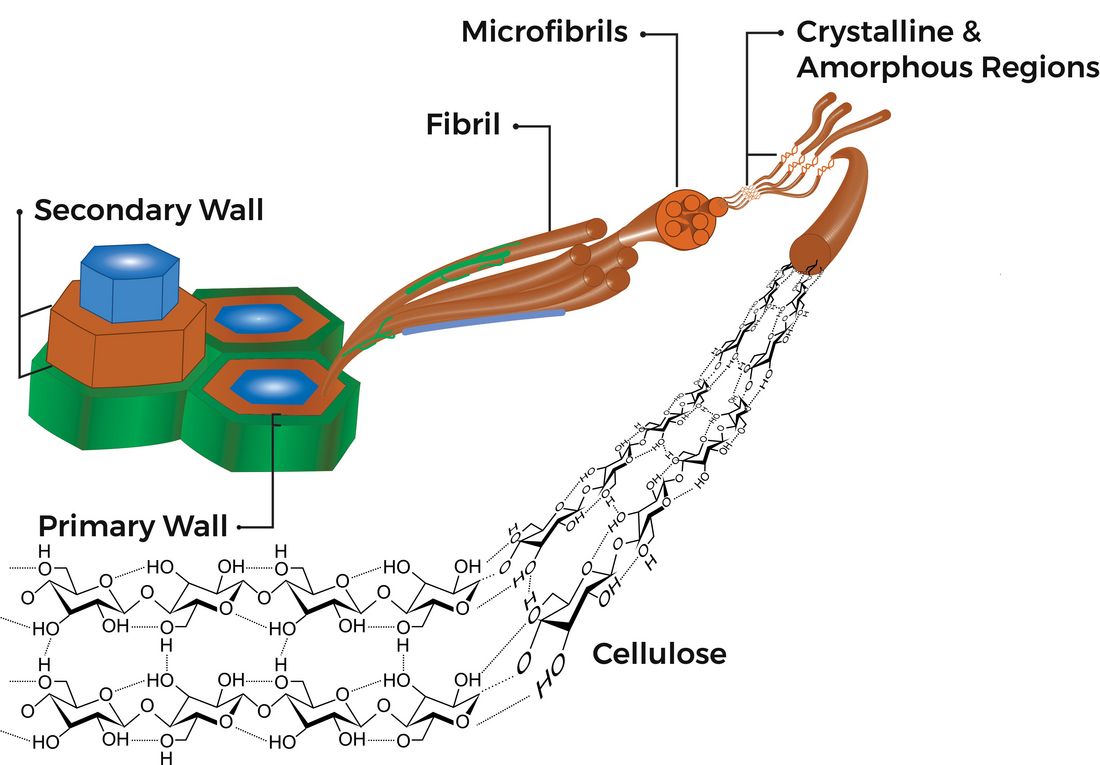 Figure 1 - Scheme of cellulose structures - macromolecule with hydrogen bonds, packed in crystalline and amorphous regions, in microfibril and fibril structure

The cellulose macromolecule is a linear polymer and it takes the form of a flat ribbon with highly hydrophilic hydroxyl groups protruding laterally and capable of forming both inter- and intra-molecular hydrogen bonds. The surface of the ribbon consists mainly of hydrogen atoms linked directly to carbon and is therefore hydrophobic. Macromolecules are organized in crystalline and amorphous regions.  These two features of the molecular structure of cellulose determine many of its chemical and physical properties [1]. The amorphous regions of the paper are said to degrade quicker than the crystalline regions [2]. The depolymerization rate of crystalline regions of cellulose is lower due to the higher degree of order within the cellulose chains reducing accessibility of ageing agents and the increase in strength induced by crystallinity. During ageing, the DP reduction levels off at a value of about 100: at this level, only microcrystalline regions of the cellulose remain [3].

Drying of paper/oil insulation is performed during transformer manufacturing and service when required, in order to preserve good dielectric properties and extend transformer life. When there is a requirement set on follow up after drying processes the current industrial practice so far has been to use DPv measurements after completed transformer manufacturing for the evaluation of paper condition, prior to going into service [4]. Several different drying techniques are applied nowadays [5]. Vapor phase technique is most frequently applied in drying of new insulation in transformer factories, since it is one of the fastest and most efficient drying techniques.

Problems connected to practical difficulties encountered with DPv measurements of some paper samples after vapor phase drying were supposed to have correlation to the type of drying process and type of papers, combined with impregnation of thermally upgraded paper or standard Kraft paper.

The term ‘‘hornification’’ is a technical term used in wood pulp and paper research literature that refers to the stiffening of the polymer structure that takes place in ligno-cellulosic materials upon water removal during drying process. Hornification is mainly as an irreversible phenomenon due to crosslinking of cellulose chains along with shortening of some chains during drying [6]. It has frequently been associated with the formation of irreversible or partially irreversible hydrogen bonding [7]. Hornification leads to decrease in water retention capacity and folding endurance and in reduction of swelling, elasticity and flexibility of the fibres [8]. Further on, this process lead to an increase of the mechanical properties, i.e. increase of tensile strength [9]. Morphological changes occur with collapse of fiber cavity, reduction of the cell wall thickness causing further shrinking of spaces between lamellae and free voids of the cell wall becomes closed. The collapse of the fiber wall starts with drying (Figure 2, stages a -initial, b, c and d-end of drying). The shrinkage in the stage d) is considered irreversible [10].

CIGRE D1.01 had organized Round Robin Test to address problems encountered with DPv determination of paper samples after transformer insulation drying, as follow up to the report from SC A2 meeting held during CIGRE A2 colloquium in Krakow in 2017. Task was to perform Degree of polymerization Round Robin Test of paper samples before and after factory vapor phase drying, using standard IEC 60450 [11]. Within this TF, following activities were conducted:

Nine laboratories have participated in this RRT, namely: IREQ, ABB, Siemens, Weidmann, Labelec, Institute Nikola Tesla, Koncar, ENGIE Laborelec and Doble Engineering. This RRT was rather short comparative exercise among nine laboratories in order to get the idea about the problem. Six samples of kraft paper were distributed, but not all samples were delivered to all participating labs. Therefore, only two samples were tested by all laboratories and unfortunately, the most problematic samples, after factory drying (A2 and B2) were not distributed to all laboratories, while resin impregnated paper samples were voluntarily tested by four laboratories (all DPv results are presented in Table 1).

DPv results of paper samples before drying were always higher than after drying as expected and within range for DP values of new paper. In some cases, unexpected low DPv values were reported for paper samples after drying (table 1).  Inter-laboratory repeatability based on five laboratories results and in total 12 measurements, revealed that 50% were within 2.5% (limit in old version of the standard IEC 60450), while other 50% were in the range from 2.5% to 6.1 %. Appearance of un-dissolved matter was not uniformly reported, but according to available information it seemed to increase in samples after drying. Only two laboratories reported mass of sediment, others reported only visual appearance, so this RRT could not provide enough information on the exact correlation of the mass of sediment to measured DPv. Highest dispersion of DPv results was observed with paper samples after drying (samples A2 and B2). In some cases, low DPv results were accompanied with significant amount of un-dissolved matter, while in others regardless of high amount of un-dissolved matter, high DPv was obtained (Figure 3). For example, highest DPv value and abnormally high mass of sediment was measured in sample A2. Since the mass of sediment was extremely high, measurement was repeated and third probe correlated well with first probe (Figure 3). It is difficult to draw any conclusions based on these results, but these observations imply that there are two causes of high dispersion of DPv values, one related to the changed paper structure after drying which may affect restricted dissolution of paper in cupri-ethylene-diamine solution (CuEN) and second one related to the existing testing procedures and its application.

Questionnaire for DPv test method and detailed measurements data were looked at in order to understand the reasons for significant scatter of DPv results between laboratories. It was observed that certain data were not reported by participating laboratories, such as viscometer constants, types of viscometers used and number of measurements with new solution fillings. This RRT revealed certain differences in the application of the method that may lead to different results, such as: CuEN solution concentration out of prescribed range, differences in time of paper dissolution in CuEN and mixing/agitation time during dissolution. 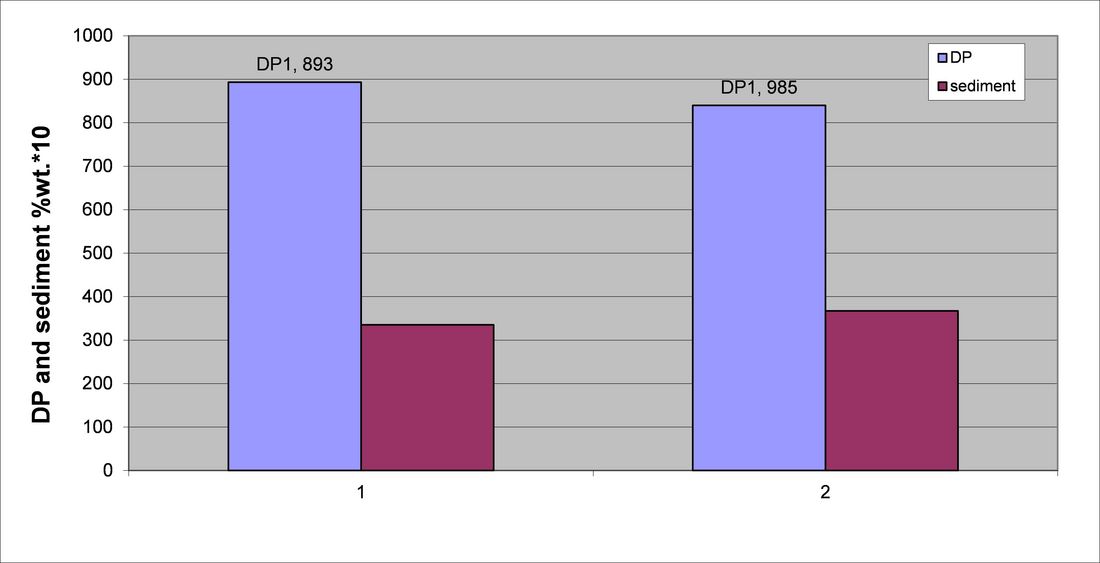 The current standard test method for determination of the degree of polymerization, IEC 60450 was found to have difficulties in performance with new paper samples after factory drying. Since no information on the type of paper or drying process of the samples has been available, it is not clear whether this is only a specific or general problem. For certain paper samples, usually for papers after factory drying it was difficult to determine accurate DPv. Most of the problems reported were related to the significant amount of un-dissolved paper observed in the bottles after dissolution in CuEN solvent. Moreover, obtained DPv results varied from unacceptable low to expectable high values. The conducted RRT revealed a lack of precise instructions for paper dissolution in CuEN and need to introduce a procedure for determination of the amount of un-dissolved matter. This comparative laboratory exercise, rather than being a regular RRT, conducted on small number of samples, revealed that the current DPv measuring method is not reproducible for some new paper samples after drying, evident from extremely high spread of DP values (from 360 to 906 and from 343 to 825) between participating laboratories. Besides observed differences in the application of the DPv method among participating laboratories, the fiber “hornification” phenomenon should be further investigated, whether and how does it affects the currently used method for DPv determination and what are the influences of differences in paper composition and type of drying processes. The findings of these investigations shall be used to provide adequate changes and improvements of the DPv test procedure within the revision of the standard IEC 60450.

CIGRE Reference Papers are lay speak orientated and provide important, unbiased technical information to help inform debate on hot topics being dealt with inside and outside the industry. Each is designed to make CIGRE technical papers more accessible, covering not just hard science but also opinions and views.